Athleticism and advocacy collide in these galvanizing stories of unforgettable women. Take this list of best non-fiction books featuring women in sports, put them in your favorite recovery beverage, and give them a shake.

A literary pre-workout drink to jump-start your next conversation about girls who really do run the world. 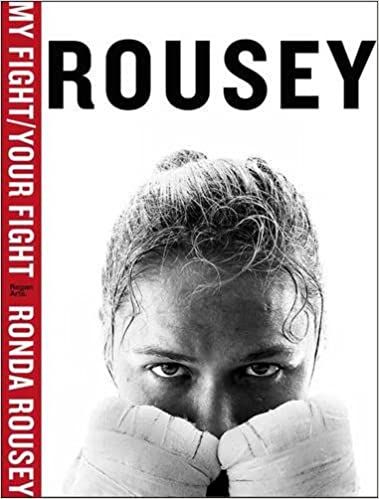 Ronda Rousey makes it abundantly clear that women can occupy a competitive space in the often male-dominated world of mixed martial arts. Contrary, however, to the traditional fighter persona, Rousey does not shy away from vulnerability and uses it to share a deeply personal story of her rise to success.

The Olympic medal holder reminds you of the coach you had who always seemed to know just which buttons to push to light a fire under you. Rousey challenges her readers to kick through the confines of self-doubt and to meet life’s obstacles with the same formidable spirit she used to confront opponents in the ring.

#2 Counting Coup: A True Story of Basketball and Honor on the Little Big Horn

Written by journalist Larry Colton, Counting Coup is far from your traditional sports story. The pages of this book are not lined with trophies, world records, or Hall of Fame honors. Instead, it is an unfiltered exploration of life on the Crow Indian reservation in Montana where, as Colton writes, “the only sign of energy…is the ubiquity of basketball hoops.”

Sharon LaForge, a talented high school basketball player, dreams of earning a scholarship to continue her sports career in college. Along the path to the high school state championship, Sharon often finds that her toughest competitors are not on the court, but rather within the unrelenting struggles of her tribe.

Athletes are often asked to push beyond their perceived physical boundaries, constantly reshaping what it means to be elite. A Team of Their Own documents the story of what can happen when the sports arena meets a land boundary that has been set in place after years of conflict.

A women’s hockey team made history in the 2018 winter olympics as North and South Korean women came together, despite a long history of political friction. Togethery, they forged an inseparable bond that their government leaders never could.

A Luminary pick from Stephen Curry, this book’s impact is one that we can’t stop talking about.

#4 Unstoppable: My Life So Far

It can be hard to choose the right flavor of hummus at the grocery store with conviction, nevermind choosing between two very different, life-altering paths. When Maria Sharapova and her father decided to leave their lives behind in Russia and come to the United States, they were certain only of one thing: Maria was destined to be a tennis star.

Beyond her sweat-filled, career-defining tennis matches, Sharapova serves up a story that takes us through what it’s like to reach international stardom status as a teenager. The lines of Sharapova’s autobiography are abundant with blunt humor and candid storytelling, reminiscent of the banter you share with a close friend over coffee.

As a two-time World Cup champion and Olympic gold medalist, Megan Rapinoe’s story is impressive enough. But the pages of One Life give its reader a better understanding of who Rapinoe is, not just as an athlete.

Advocacy comes first to Rapinoe and she uses her platform as a world-renowned athlete to bring awareness to conversations surrounding sexual identity and gender discrimination. You might also remember this U.S. women’s national team co-captain as the first white athlete to take a knee alongside Colin Kaepernick in protest against racial inequality.

Peer into these pages for a glimpse of an indomitable spirit, a generous heart, and an unbreakable passion for justice.

The women in these books are more than athletes. They are changemakers leaving the world better than they found it. Maybe their stories will inspire you to make changes within your own life—maybe you’re ready to hit the gym or to finally introduce your new running sneakers to the pavement. Or maybe, they’ve inspired you to seek out more real-life tales of varsity-level world-changers. In that case, put us in, coach!

Find your Luminary and join our team today!

ERIC. Counting Coup: A True Story of Basketball and Honor on the Little Big Horn. https://eric.ed.gov/?id=ED446885

Kirkus. My Fight / Your Fight. https://www.kirkusreviews.com/book-reviews/ronda-rousey/my-fight-your-fight/

You’ve been itching to get more into nonfiction books, but sometimes it seems to take you weeks just to get past the first few chapters. We get it. Nonfiction can be slow. The genre is packed with stories that need to be told on topics that you’d love to know more about. But they don’t

On The Shelf: Malala’s Favorite Reads

Malala epitomizes fearlessness. So it’s no wonder her favorite reads aren’t for the faint of heart.  The protagonists in her picks mirror characters in her own life—a lionhearted hero, a daring daughter, maybe a lovable father or two. No matter the premise, Malala’s favorite reads invite readers into worlds culturally different than their own. They’re

Once considered too short for the court, champion baller and activist Stephen Curry knows a thing or two about being underestimated. It’s no wonder his bookshelf is filled with stories of unlikely heroes overcoming insurmountable odds and defining their own path. If that sounds like a bookshelf you want to peruse, we’ve got you. From

Susan Orlean: staff writer for The New Yorker by day, professional literary connoisseur by night. In Literati’s Private Collection Book Club, Susan Orlean’s book collection is a treasure trove of exceptional writing and unforgettable narratives. In her book selections, Orlean has a knack for finding fiction where the writing is truly an art form. Curious