Written by the movers, for the shakers.

Non-fiction books bring us, at times, uncomfortably close to the tales that await inside.

But you, dear shaker, have come to value the conversations that arise from sitting in discomfort, and the tools you are now equipped with because of them.

We’ve put together a list of Luminary picks for the best non-fiction books from the first six months of our Luminary Book Clubs. 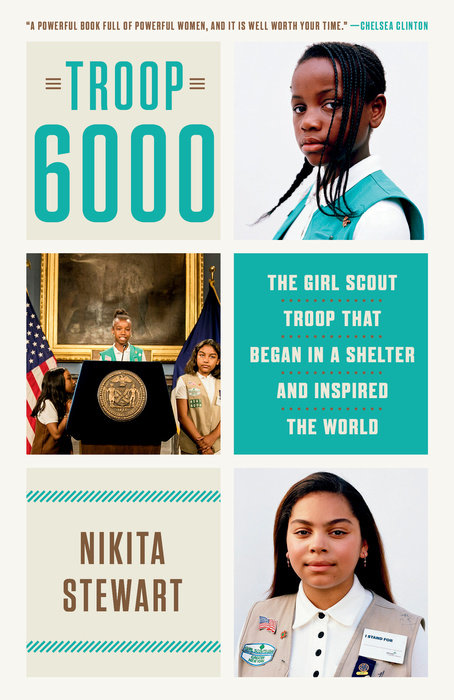 Take a walk down the streets of New York City, past the buzzing allure of Times Square, beyond the carefree brunch-goers in the West Village, and into the life of Giselle Burgess.

In her debut book, Nikita Stewart takes us by the hand as we walk through the everyday reality of a single mother raising five children in the New York City shelter system. Troop 6000, started by Giselle Burgess, is the first Girl Scout troop comprised solely of young girls with a common struggle: homelessness.

As if we needed another reason to buy more Girl Scout cookies.

You’re sure to find Patti Smith’s Horses nestled amongst your dad’s any meticulously-alphabetized record collection of rock classics. On the cover, there’s Patti. Jagged black bangs scattered just above her eyes, and a charcoal blazer draped over her shoulder.

Patti Smith reflects on that photo in her memoir Just Kids: “I never see me. I see us.”

The “us” she’s referring to is the man behind the camera, Robert Mapplethorpe.

Before they were icons, they were kids. And that universality of becoming is, perhaps, what we love most about this memoir, chosen by Luminary Richard Branson for his book club, Reading with Richard. We can all find a piece of ourselves reflected in the relationship between Smith and Mapplethorpe, and in the boisterous adventures of their youth.

Bring a glass of whiskey, a remember-when story to share, and join Patti Smith on her living room sofa. Nostalgia awaits.

Walter McMillian, a Black man wrongfully convicted of killing a young store clerk in the 1980s, was sentenced to death by electrocution. Bryan Stevenson, the author of Just Mercy, is the defense lawyer who would later go on to represent McMillian in the appeal that would ultimately change his fate.

It’s a narrative that is hauntingly familiar.

Stories like Walter McMillian’s—many of them still untold—beg us to mend the cracks in a system that has come up short in reconciling with our tumultuous history. Stevenson invites us to listen, to participate in challenging conversations, and to demand change alongside him. The Equal Justice Initiative founder says, “There is something better waiting for us in America.”

Another standout from the Luminary picks is Stephen Curry’s selection, Haben. This is the one you’ll want to share with your friends immediately, and the one you’ll keep close at hand to be re-read whenever you need to send self-doubt packing.

From inclusion to innovation, Haben Girma chooses to combat the challenges of disability with opportunity. As the first Deafblind graduate of Harvard Law, Girma reminds us to root for ourselves when the illusion of impossibility starts to take over.

For the impactful travel enthusiasts, this story will take you through Alaska’s icebergs, the desert of Mali, and even an office visit with Obama. Pack your passports and hop aboard!

Malala, the inspiring activist and curator of Literati’s Fearless Book Club, is a woman who refused to be silenced. After telling her own story, she now holds the megaphone for other women to do the same. Aftershocks, a memoir by Nadia Owusu, is a top choice for Malala and the Best Non-Fiction Luminary Book Club Books list.

With roots extending across Armenia, Ghana, Italy, England, Ethiopia, and Uganda, home for Nadia is everywhere and nowhere at once. Like a dear friend, Owusu confides in us about her search for identity as a biracial woman, her estranged relationship with her mother, and her years-long journey with grief after the loss of her father.

We sometimes think of our Luminary curators as (truly sophisticated) friends. You know, the ones who ask really good questions, send you home with a tote filled with their latest favorite books, and generally give you a newfound appetite for life. Start perusing their bookshelves now with Literati Book Clubs.

Random House Books. The Girl Scout Troop That Began in a Shelter and Inspired the World. www.randomhousebooks.com/books/605830/

NPR. ‘Aftershocks’ Is A Powerful Memoir Of A Life Upended — Then Pieced Back Together.

You’ve been itching to get more into nonfiction books, but sometimes it seems to take you weeks just to get past the first few chapters. We get it. Nonfiction can be slow. The genre is packed with stories that need to be told on topics that you’d love to know more about. But they don’t

On The Shelf: Malala’s Favorite Reads

Malala epitomizes fearlessness. So it’s no wonder her favorite reads aren’t for the faint of heart.  The protagonists in her picks mirror characters in her own life—a lionhearted hero, a daring daughter, maybe a lovable father or two. No matter the premise, Malala’s favorite reads invite readers into worlds culturally different than their own. They’re

Once considered too short for the court, champion baller and activist Stephen Curry knows a thing or two about being underestimated. It’s no wonder his bookshelf is filled with stories of unlikely heroes overcoming insurmountable odds and defining their own path. If that sounds like a bookshelf you want to peruse, we’ve got you. From

Susan Orlean: staff writer for The New Yorker by day, professional literary connoisseur by night. In Literati’s Private Collection Book Club, Susan Orlean’s book collection is a treasure trove of exceptional writing and unforgettable narratives. In her book selections, Orlean has a knack for finding fiction where the writing is truly an art form. Curious